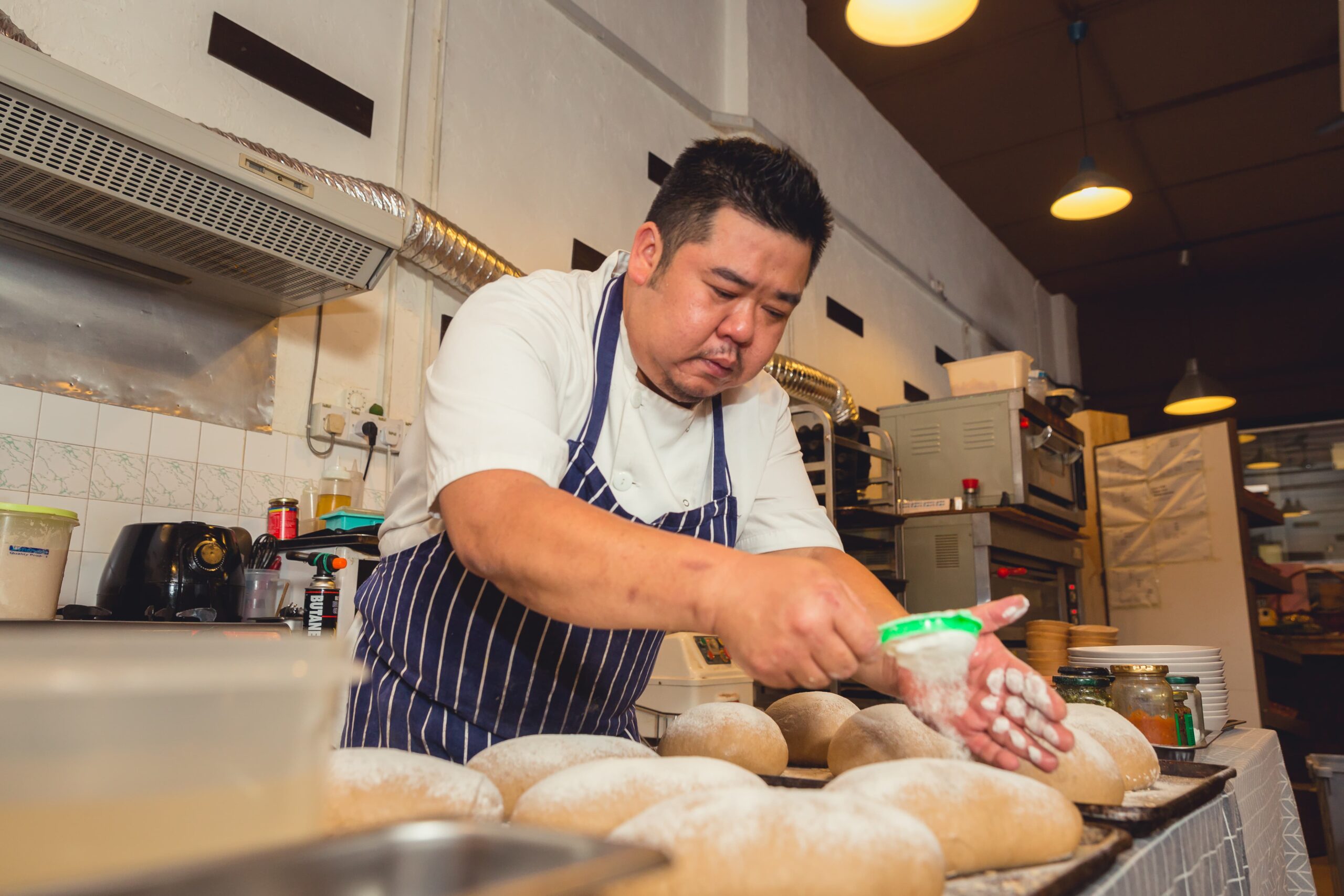 When Covid19 hit, Sam Lau of Artisan Handmade Bread was forced to return to his baking roots – but not all’s gloom and doom.

“Come come, Alex, you must try some sourdough from this young man.”

My ears pricked up. Sourdough was starting to trend in Kuala Lumpur, but I had not heard the word in Ipoh, until that moment (circa 2015/6).

I walked curiously to where my friend Pak Peter was standing beside a popup stall, one of several taking part in Indulgence Restaurant’s outdoor food bazaar.

The young baker – whose name I found out was Sam Lau – smiled tentatively as he handed me a piece of rye sourdough spread with fruit preserve.

I bit into it and gasped. Wow, it was delicious!

“This young man has lots to offer Ipoh,” Pak Peter gushed as Sam tried not to look embarrassed. “You’ll be seeing much more of him!”

Pak Peter was right, for Sam was no ordinary baker. Some 20 years ago, he had left Ipoh in search of better opportunities for the United Kingdom. He worked at Michelin-starred restaurants and was mentored by top chefs like Grady Atkins. Now that he had come back to Ipoh, he wanted to use what he had learned and introduce British French bistronomy to the food scene in his hometown. 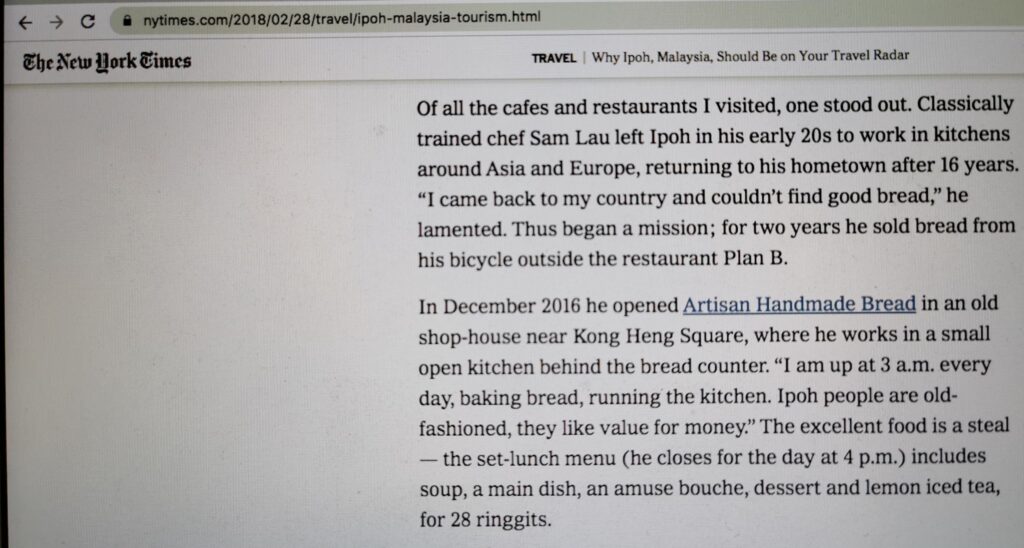 In those short years after I first met him, Sam made waves with Artisan Handmade Bread, the cafe he opened in the revitalized heritage section of Ipoh around Sekeping Kong Heng. Accolades poured in fast and furious for this ambitious young chef. Newspapers, magazines, TV appearances … he even scored a mention in New York Times!

Then after four years, something happened that no one saw coming. One after another, food and beverage establishments got shuttered by COVID19. 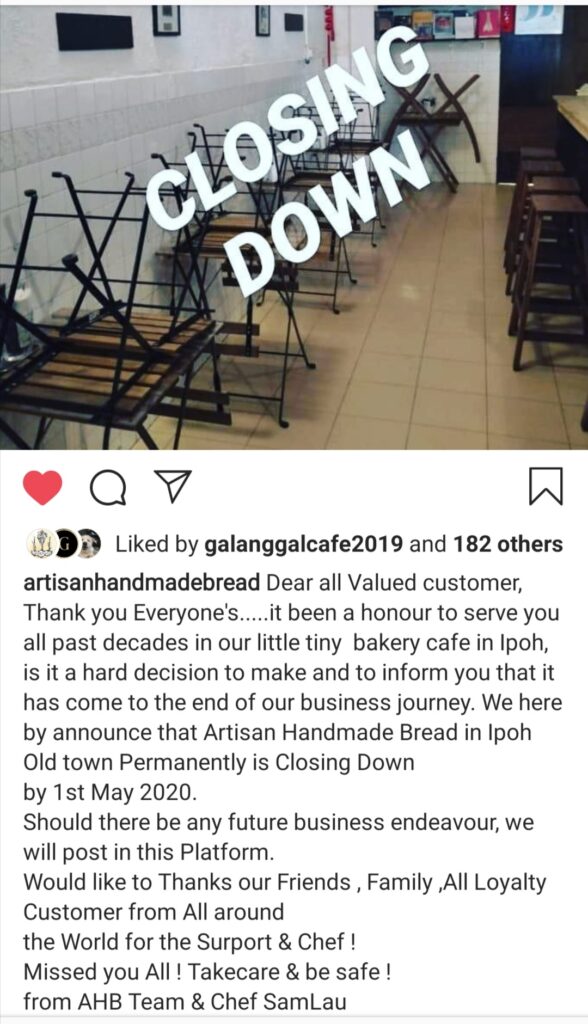 On April 27, Artisan Handmade Bread became the latest victim. After Sam uploaded a “Closing Down” post on social media, a multitude of fans flooded his Instagram and Facebook accounts with comments.

I was heartbroken too, but decided to wait until the dust had settled before catching up with him.

Before I had the chance to do so, a new notice went up on May 16 saying he was back in business.

“Sam! What’s happening?Are you going to start another cafe?” I texted him excitedly.

“Nope. I’m going to go back to where I started: baking bread.”

Bread became one of the most sought-after commodities during the Movement Control Order. Pictures of folks lining up for Gardenia bread circulated widely. Naturally, the high demand for bread spilled over to Sam.

There was just one problem: With MCO, he was down to a one-man show, so he couldn’t bring interns to help him. He would have to do everything by himself, from baking the loaves to taking orders to making the deliveries. But with no other sources of revenue, bills to pay, and two dependents, he had no choice in the matter.

In between churning out wholemeal oat, rye sourdough, foccacia garlic herbs and kaya, Sam shared easy recipes on social media. He barely had time to sleep, but he was happy that in times of crisis, the folks of Ipoh gravitated to his baked goods for comfort.

In four years of operation, he had never received so many orders for bread.

By the second or third week, it was clear to Sam that a new normal would take over after MCO was lifted.

“COVID19 has changed customers’ behaviour. People are scared. They want healthy, affordable and convenient food – and safety is a top concern.”

Dine-in was not going to be sustainable, especially for small players like Sam.

“With the new social distancing rules, my shop can only seat maximum 10 persons. How could I cover my expenses?” 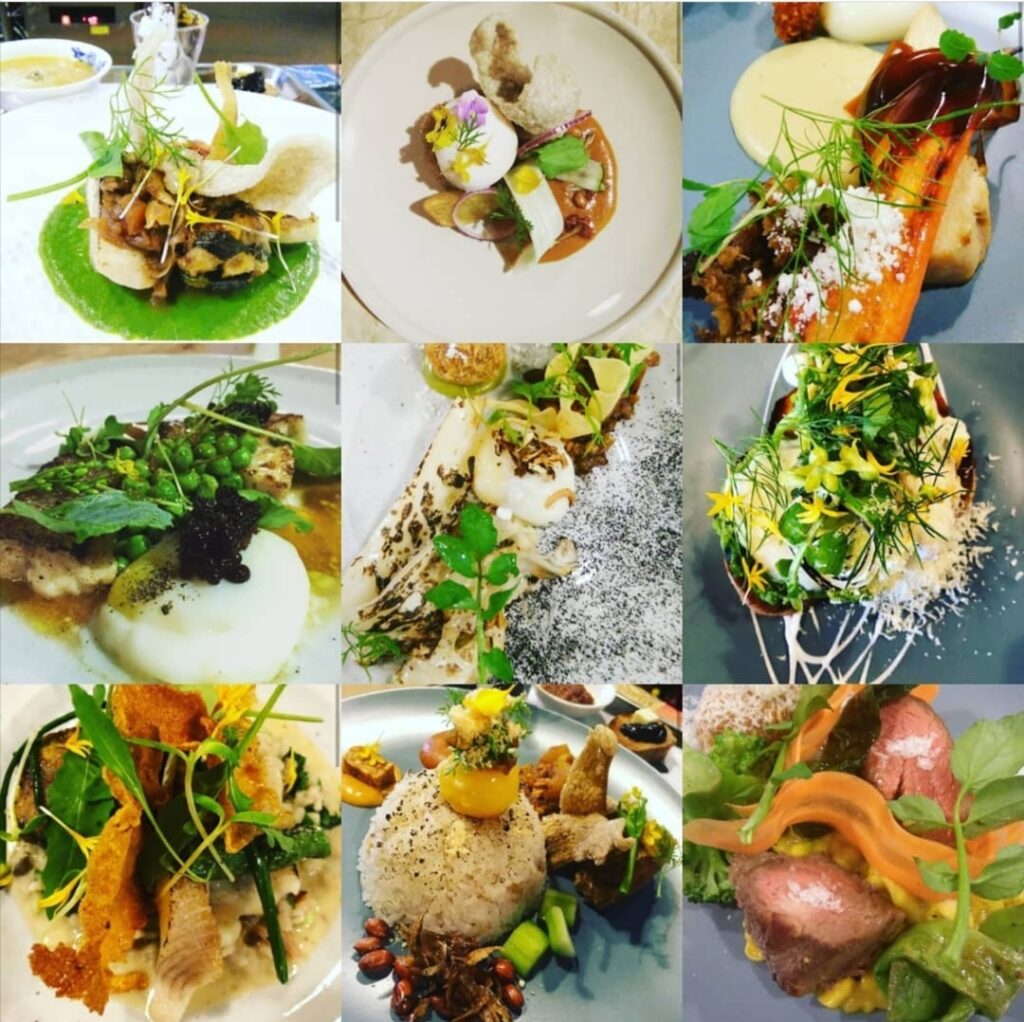 Even more so because of Sam’s unique dining concept. Before MCO, his menu featured artisanal bistronomy food with a local twist. His interpretation of loh mai fan, for example, has the glutinous rice base cooked risotto style, served with a sous vide chicken roulade and curry reduction, and garnished with marigold flowers and watercress leaves.

At Artisan Handmade Bread, Sam sold his food at wafer-thin margins because he wanted to introduce Ipoh people to an artisanal dining experience that paid homage to old traditions while embracing new methods.

Despite this, not everyone was a fan. Over our chats, he sometimes shared his frustration at the harsh comments he received. Some customers thought his food was pretentious. Others accused him of being a show-off just because he had learned culinary skills overseas. Etc etc.

“To be honest, I’ve been struggling to keep going over the last few years. What was the point of trying so hard when people don’t appreciate what you do?”

COVID19 merely accelerated the inevitable. Clearly, fancy meals weren’t going to be a thing for some time. The realization helped Sam made up his mind quickly. He decided to cut his losses and close his outlet in Old Town Ipoh. The lease was up anyway.

On April 27, the shutters came down on Artisan Handmade Bread, the cafe, for the last time. 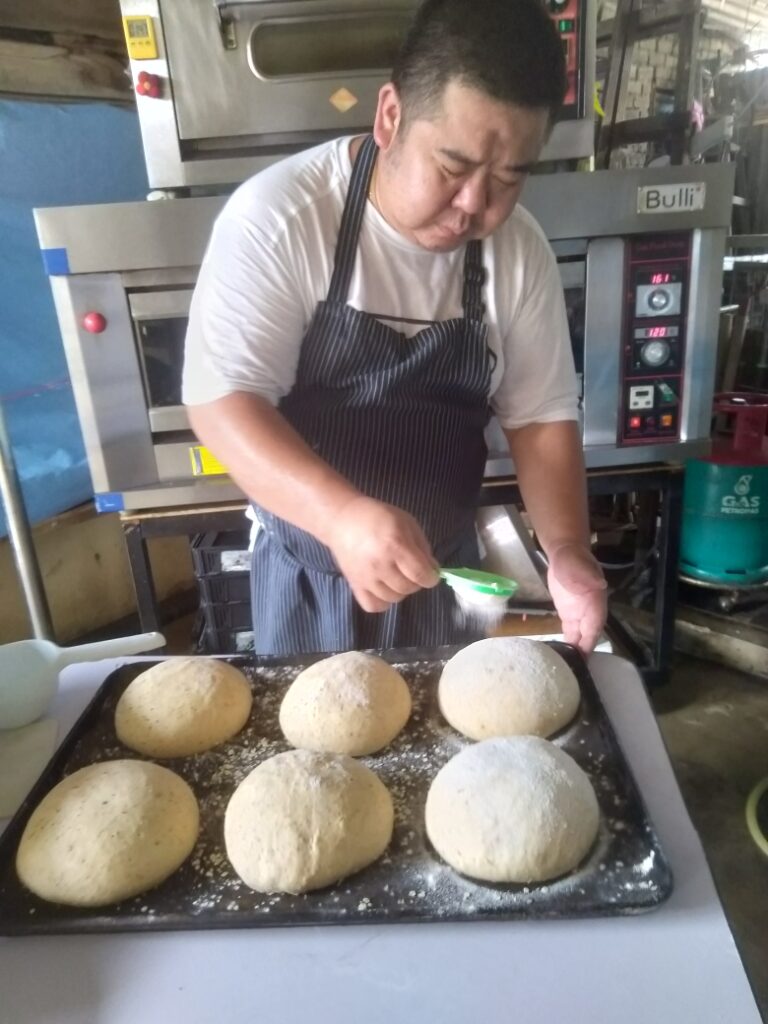 Back to his baking roots

When we speak on the 16th, I note that he sounds surprisingly calm, for a man who just closed a business he spent four years growing. I soon find out why.

Turns out, he has just found a small shop near his house which can serve as a central kitchen to bake bread and make condiments like preserves, kimchi and kaya. He intends to focus on private pre-orders and home deliveries. He works with local service provider Rider Empire to deliver the orders. #supportlocalbusinesses 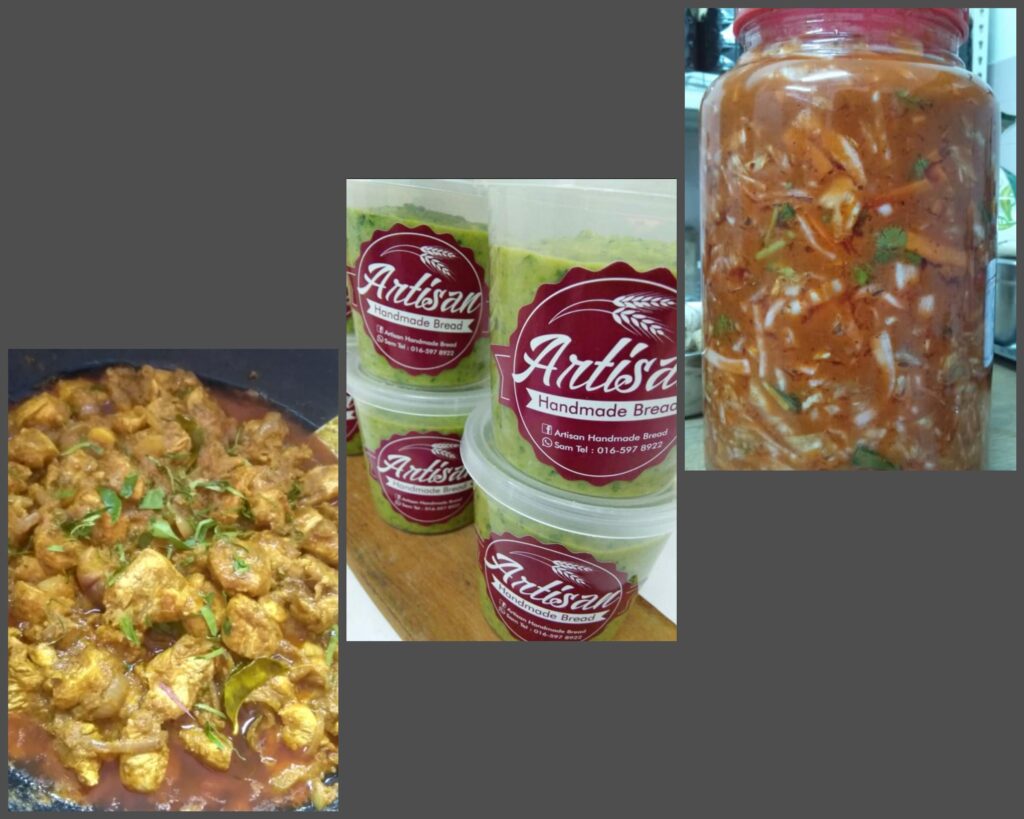 It’s a great idea, I tell him. “Do you plan to offer full meals too, like you used to?”

“Not for now. I’m just going to being a baker .. do simple basic stuff.” He adds with a laugh, “No more fancy food.”

At his words, I feel a mix of pain and relief. “Will you miss your previous life?”

“It was a good experience. I’m happy I had the opportunity to have done all that, but that part of my life is over now. I’m just grateful for the chance to start over.”

There is an unmistakeable sincerity that comes through his voice. I have no doubt he is telling me the truth.

Then he pauses. “It is every chef’s dream to open his own restaurant. Yes, it was painful to shut it down after pouring so much time and energy into it. But I tell myself it’s not the end of the world. There will always be a demand for good, simple food. I may have lost my shop, but not my skills. As long as I have that, I can survive anywhere.”

Gambate, Sam. We’re all rooting for you.

Sam hopes that by sharing his story, he can encourage other small business owners to carry on. Sometimes, life may take an unexpected turn but it can be an opportunity to start something new to offer your customers.

Sam uses all natural ingredients with his own wild yeast levian starter.
Please check with him what’s available as the menu changes according to ingredient availability in the market.