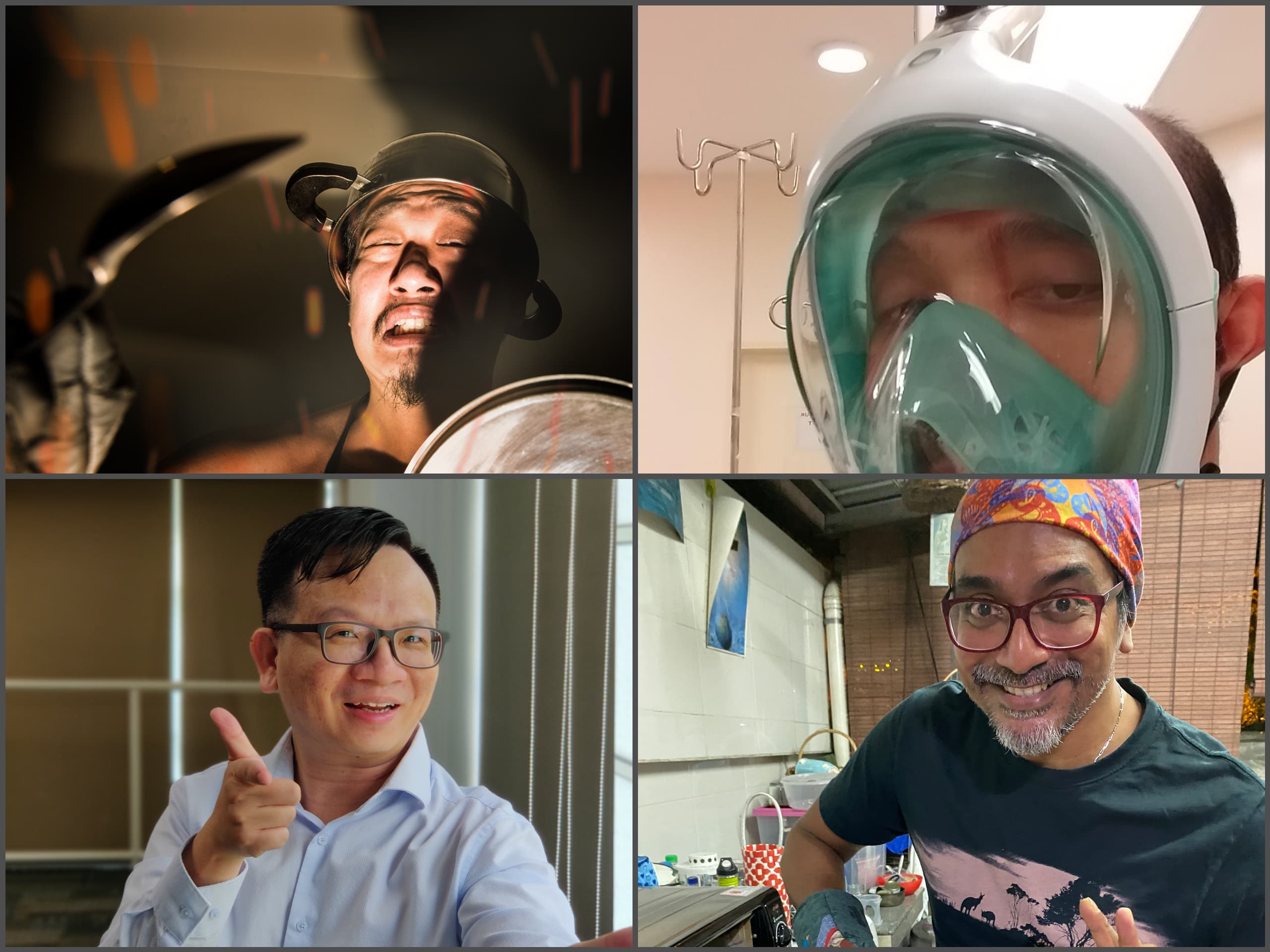 Four Malaysian men who cook actively share their formative experiences and kitchen tips they’ve picked up along the way.

It didn’t quite start out that way for my friends Vemanna Appannah, Kenny Fong, Rahmat Shazi and Choen Lee.

One was conscripted as “free labour” in his sister’s home science experiments. Another was warned by his mother to learn cooking or else, “starve as a bachelor!”. The others had to cook to survive.

But from that inauspicious start, they went on to discover the wonderful artistry and the technical innovation that goes into a well-prepared meal, and live on to tell the tale of the immeasurable, underrated joy that cooking can bring.

You can thank Vemanna’s elder sister for initiating him into the cooking world: she roped him into helping out in her Sains Rumahtangga’ (Domestic Science) experiments, when he was still in primary school.

His sister delegated the task into small steps so that the little boy could follow. Describing how they made coconut candy, he says, “She would ask me to grate the coconut finely using the manual coconut grater that every kampong household has. While she prepared other ingredients, I cut some banana leaf from our backyard into A4 paper sizes. Then, I would apply a thin layer of butter to the inside of the tray. She made the coconut candy using a wok on a firewood stove. Once the coconut candy was ready to be taken off the cooking wok, I would standby with the buttered tray and banana leaf. After the coconut candy went into the tray, I would even the top using the banana leaf.”

Are you drooling at the description? Because I most definitely am!

Though initially a reluctant helper, working on those culinary experiments kindled Vemanna’s curiosity about cooking. Upon request, he can whip up a mean chicken varuval and cucur bawang, but these days, he prefers to cook healthy food. “Only steam and grill, no deep frying,” he says firmly.

Helping out around the house at a young age indirectly inspired a passion project during MCO. He made a series of short videos titled “Maid in Bangsar”, featured Vemanna doing housework. Set to country music and shot in a breezy style, the charming videos make sweeping, cleaning, ironing and cooking look like fun!

Catch the Maid in Bangsar in action here:

Sharing how it all started, he says, “I usually have a helper coming 4 days a week to clean my house, do washing and ironing and a gardener to cut grass once a month, prune scrubs and trees too. But with MCO they had to Stay Home.”

Still cleaning, washing, ironing and gardening must go on, so Vemanna took the tasks on himself. “People were busy making Youtube and TikTok videos that became a hit from being home, so I revived my YouTube channel. Since I don’t have a helper, I became the maid, Maid In Bangsar that is Made In Bangsar!”

“You better learn how to cook or you’ll starve as a bachelor!” Kenny Fong’s mother warned him as a child.

She said that to him at an impressionable age, when he was “more into PC games than girls!” Nevertheless, young Kenny discovered that he enjoyed helping around the kitchen and soon enough, he graduated from official family rice cooker to soup maker.

Other than his mum, Kenny also picked up a lot of culinary tips from the TV show “Yan Can Cook!” (This was before the age of Youtube ok) “The formulaic nature of the recipes from the show made the whole ‘operation’ accessible to me, and helped me gain confidence in my own decent abilities.”

Kenny’s early induction into cooking proved to be an asset during college. As the designated cook in the house, Kenny was responsible for feeding his five finicky housemates. “I made everything from curry laksa to lasagna.”

Looking back, Kenny is glad to have taken up cooking although it was a skill he adopted out of necessity. He says, “Cooking is a creative challenge. Most of the time you must think of alternative ingredients and working with what you have at hand. It’s an essential life skill!”

These days, his wife Chia Hsin does most of the cooking, but he chips in once in a while. And when he does, he likes to go back to his old favourite: soup. Kenny makes a mean lotus root peanut soup.

Rahmat Shazi picked his kitchen skills from his mother, a formidable cook and school teacher. As a working single parent to five children, she made sure Rahmat had the ingredients to make fried fish and sautéed vegetables for lunch before going to school.

He describes his first time at the stove as “nerve-racking.” “Here I was a nine-year-old having to manage the pan, the hot oil, the flames, whilst taking instructions simultaneously.”

But in the haze of panic, a light bulb went off in his brain. “Observing the sizzling of the mackerel coated with turmeric and salt and how it became golden brown and aromatic, an epiphany hit me. I wasn’t just cooking; I was transforming raw material into a new form, with new flavours and scent, a masterpiece! Did I say I had illusions of grandeur when I was young?”

Jokes aside, Rahmat makes a good point about cooking being combination of science and art, though unfortunately, it rarely gets the respect it deserves.

As an Innovation Management Practitioner, Rahmat finds “cooking to be the most accessible activity the ordinary person can do that falls under innovation.” “Selecting the ingredients, deciding which ‘process’ they will undergo, actually carrying the process out, checking the quality so that it meets expectations: all these represent the phases of the innovation value chain. And we in Malaysia don’t really manage that pipeline, but that’s a discussion for another day.”

Creating dishes from a variety of cuisines is a skillset Rahmat has honed painstakingly over the years. From his considerable repertoire, he regards ayam masak merah to be his piece de resistance. “Compared to the typical ones, I prefer mine a bit richer in colour and taste. I enrich it by adding in tomato puree. Bon appetit!” 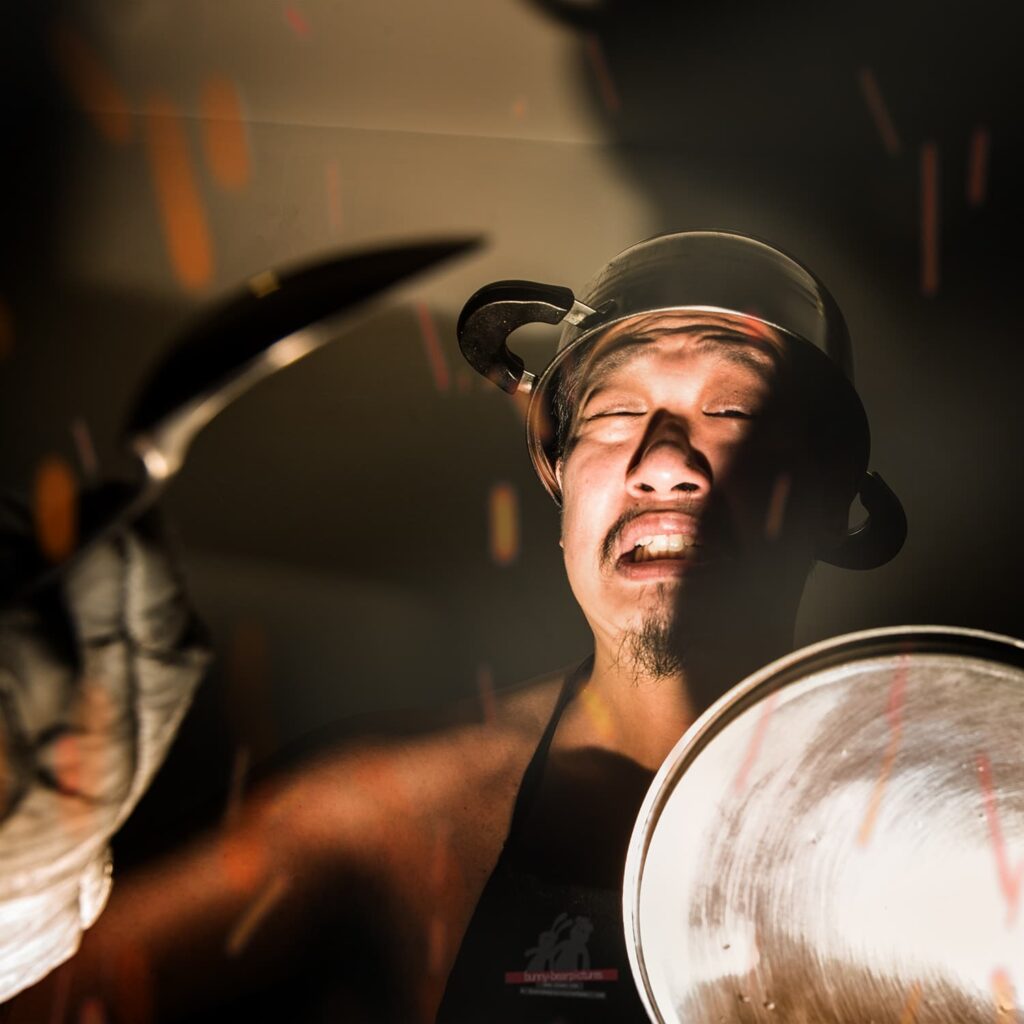 When Choen Lee was accepted into an architecture school in London, the first thing he did was to park himself at the tables nearest to the cooking stations at roadside hawker stalls, ‘tai chow’ and mamak shops. His objective was to learn how the food actually gets prepared – so he could replicate them in UK!

It was easier said than done. “When I got to the UK, the Asian Financial Crisis had hit, so I had to improvise with cheap and limited ingredients. I mostly cooked to survive.”

On the plus side, living abroad in a diverse community offered an unrivalled fast track to learning the unique characteristics and quirks of global cuisines. “My first housemates were provincial English dudes, who were mostly eating frozen microwave meals or boiled chicken breast with salt and ketchup. They would complain that the air was too peppery because of what I tried to do in the kitchen. This made me adjust what I cooked.”

“Some time later when I lived with some guys from Mumbai we had some amazing cookouts and bangra parties with an international community of people with Indian ancestry. One of them was a hotel chef doing his masters. I was always astounded by how he mixed the ingredients and spices for his wonderful vegetarian curries!

From his Hong Kong friends, Choen picked up tips on how to make Cantonese soups and quick working class dishes. From the Greeks, he learned how to layer whole ingredients for baking. A Japanese friend taught him to cook rice in a saucepan without getting it too wet or too dry. And from a Korean architect furthering his papers, Choen picked up a handy tip: the rice cooker can be used to roast chicken!

These days, he cooks what he calls “simple stuff” driven by “home economics” for the wife and kids. But look closely and you’ll see how those diverse influences from his student days live on in his imaginative interpretations. “Fried rice” can take the form of smoked salmon, onions, pakchoy and soya sauce fried basmati rice, or turmeric fried basmati rice, served on a piece of ham, and topped with crispy anchovies.
https://www.instagram.com/p/B_jkLkLpLeV/

His design background comes out to play during plating. Check out how he arranges vegetarian fried rice in the shape of a fish, cheekily captioned “Don’t be fooled by the way things look.”
https://www.instagram.com/p/B_9XpD8JiOn/

And did I mention he also makes a mean sourdough too?