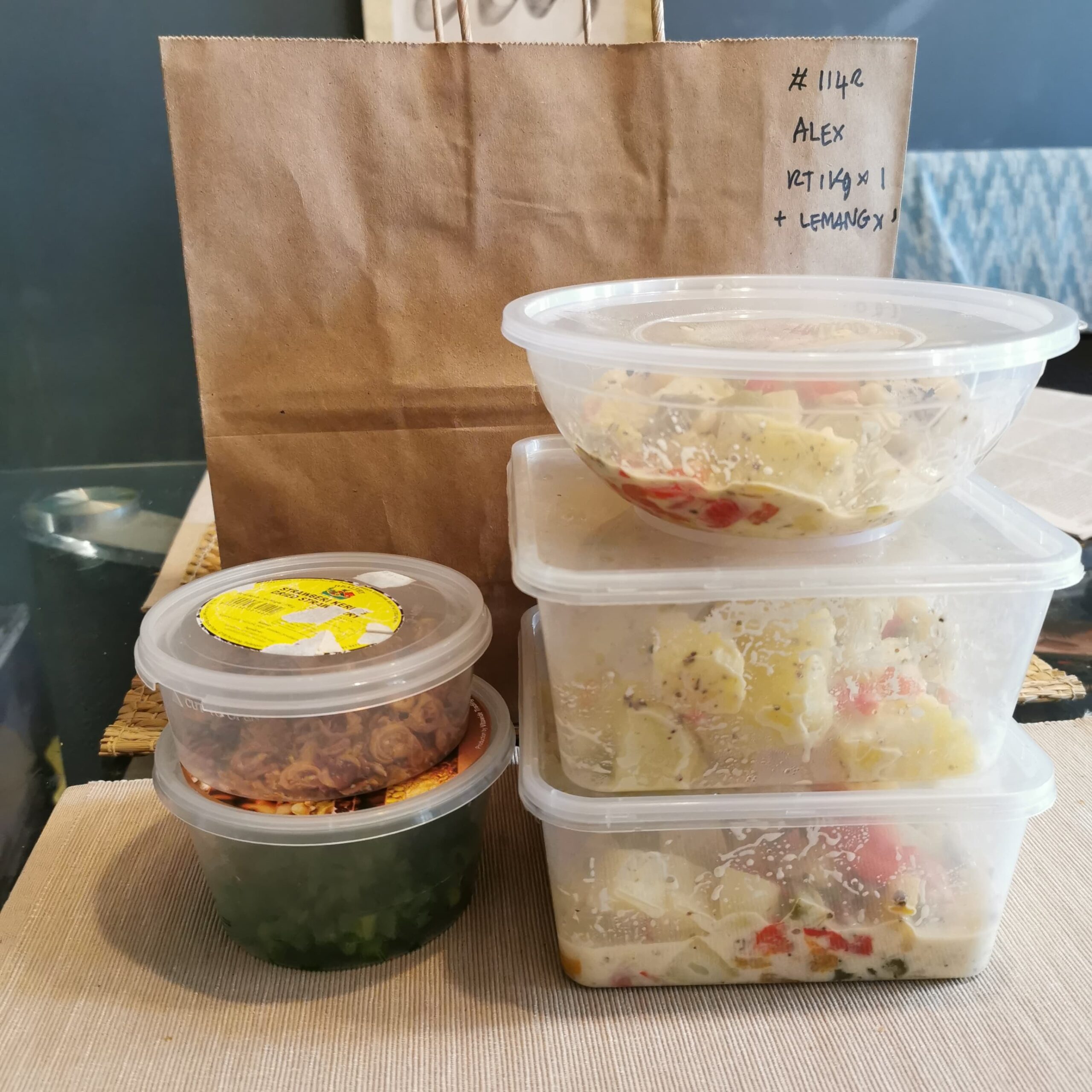 What my first catering job taught me about organizational efficiency

A few weeks ago, I uploaded a recipe post for a roasted peppers potato salad.

The first comment was from Rachel Ang, who declared she loves potato salad. Our banter went on for a bit, until she posted this jaw-dropper: “That looks delicious! I was just telling my husband I want to order the potato salad from you. Will ping you offline.” 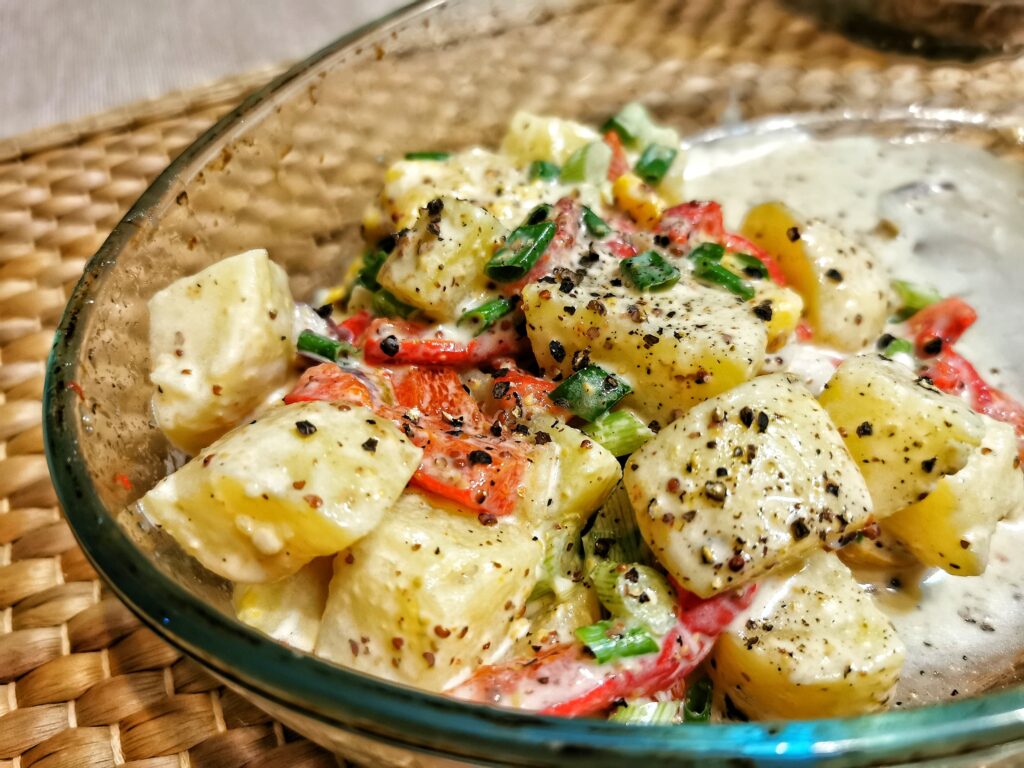 Turns out Rachel was not kidding.

Offline, she explained that she was throwing a dinner party for the coming Saturday. Would I be able to cater for 7 adults?

Gulp. I’d never cooked for more than 4 people in my life, but I did not want to turn down this opportunity. There was one snag: hubs and I had planned to drive back to Ipoh on the morning of her dinner party day.

Could I deliver the salad first thing in the morning, before we drove to Ipoh?

No problem, she said.

… and with that, I landed my first catering gig. I wanted to shout out my joy from the rooftops. How hard could it be, selling a tub of potato salad for 7 adults?

Turns out, not as easy as I thought. Here are three lessons I will remind myself of, before taking on my next catering job.

1. Be flexible in your planning – you need to be ready to pivot when necessary

I had originally made my salad with Heinz Seriously Good mayonnaise because I loved the balance of umami and creaminess. I was dead set on getting it, even though I knew it was not a commonly available ingredient. My own bottle of Heinz had run out so I had to buy a new one.

As I had a meeting near Jaya Grocer in Pearl Shopping Gallery, I started hunting there. To my dismay, they didn’t stock Heinz but they did have Hellman’s, another premium brand. However, I had never tried Hellman’s so I didn’t want to take a chance. (Sorry, the local brands of mayonnaise can’t cut it).

Since I refused to “lower my standards”, I had to find it elsewhere. I went to De Market, which is where I previously got my bottle of Heinz. Alas, they didn’t have it either. The only acceptable option was another premium brand … and that meant Hellman’s .. which also meant a THIRD trip to get one miserable bottle of mayonnaise!

That evening, my ever-accommodating hubby drove me to Pearl Shopping Gallery after work. I almost wanted to cry from frustration as I factored the additional costs from petrol, parking not to mention time lost – all because I refused to settle for second choice.

This is why caterers and restaurateurs always have alternative suppliers and ingredients, I realized.

2. Your pricing model needs to factor in more than just the obvious costs

As my customer was a friend I trusted, I did not talk price upfront. Truth was, I had no idea how to price my food!

My initial instinct was to add up the costs of my ingredients and slap on an extra 20-30 bucks for labour. Sounds reasonable, right? It might have worked – IF I was efficient.

Unfortunately, I was far from efficient because of my inexperience. I probably ended up spending EIGHT whopping hours on the job, running in between supermarkets to get the ingredients I wanted and prepping the items, which consumed more time than I anticipated (see no 3).

I also didn’t factor in hidden costs such as electricity, gas, petrol, and packaging. Luckily we ordered delivery a lot during MCO so we had spare plastic containers to store the salad and the condiments!

But yeah, pricing is an art in itself.

3. For optimum efficiency, you have to understand your resources thoroughly

Prepping the peppers and potatoes was far more challenging than I expected. Before this, It never occurred to me that they might behave differently because I was prepping them many hours before they would be eaten – and their characteristics might change.

For example, I decided to cook the peppers a day earlier because they required some prep work. Roasting peppers is not as straightforward as instructions sound in recipes. After roasting them in the oven, you have to let them cool, remove the skins, scrape the seeds out and chop them.

After doing all that, I stored them in a container in the fridge. Sorted!

An hour later, I checked in on my peppers. To my horror, a pool of liquid had formed in the container! That’s when it hit me, peppers have high liquid content so roasting them would induce them to leach their juices.

I carefully drained as much liquid as I could, and popped the peppers back into the fridge.

A couple of hours later, I opened the fridge to check on my peppers and saw that they had leached more liquid. More frantic draining ensued. This happened a few more times before the peppers seemed to stabilise.

I had never roasted peppers and left them overnight before. If they continued leaching liquid, it would make the dressing watery and ruin my salad.

Worried about my peppers, I couldn’t sleep and finally gave up trying to. At 5am, I shuffled into the kitchen to check on my peppers. Thankfully, they had stopped leaching liquid. Now on to the last item.

By right, the potatoes should be a piece of cake. Drop them into water, let them boil for 35-40 minutes, peel them they are cool enough to handle and cube them.

… but I should have guessed something would come up. So far, it had been one speed bump after another.

While mixing the potato cubes with the dressing, I noticed that some of the potatoes started crumbling a little. Crap. Another realization hit me: the potatoes were still hot so they would continue cooking in their steam. With 12 hours to go before they would be eaten, the potatoes might soften and crumble too much if incorrectly handled.

There was nothing I could do about it now, but be extra delicate in handling the potatoes to ensure minimum breakage.

By the time I’d packed and delivered the salad, I was a sweaty high strung pool of mess. I slept all the way during the two-hour drive to Ipoh.

You know what came to mind, though, after going through this whole salad saga?

For it to thrive, the leader has to understand every element in it, its unique traits and how it interacts with the other elements. Take what I learned about peppers for instance – after roasting, they behave differently 15 minutes, and one hour later. And for an organization to work in sync, you need a mission and vision that binds all these elements together. In cooking, we call this the recipe 🙂 #oktalkingcrapagain

One thing for sure, I’ve developed a whole level of respect for caterers.

Which begs the million-dollar: would I do it again?

Since I’ve found out where the pitfalls are, I know how to dodge them. Call me a masochist – I like taking on challenges that push my boundaries 🙂

Also, it definitely helps that my first catering job has a happy ending. This is Rachel’s feedback:

“I absolutely love your potato salad ❤ The crunchy shallots work surprisingly well with the salad. I can eat it all day. Will definitely order again and recommend to my friends!”

I am now contemplating making other simple stuff like pasta, granola, etc. Look out for my next announcement to “open for order”.