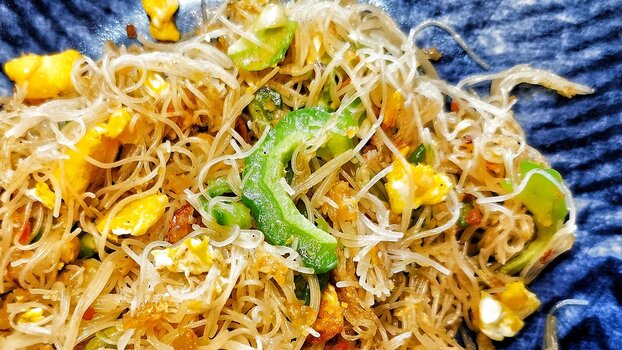 Sounds strange? Don’t knock it till you’ve tried it, though. When this dish appeared at a table in a Chinese restaurant in Kuching a few years ago, I was skeptical as well. Seeing the look on my face, my Kuching host merely smiled and told me that it’s a local dish available in some Kuching restaurants but not commonly known. Swallowing my misgivings, I took a tentative bite and went, “Woah! This is freaking delicious!”

Everyone who has tried this dish has the same feedback. Skeptical at first, won over at first bite.

When making this dish, make sure you fry the dried prawns until golden brown and crispy.

This is very important because a huge attraction of the dish lies in the savoury umami and crunch from the hae bee. The worst is to have raw-tasting dried shrimp, yuck!

Fear the bitterness of bittergourd? Fret not. You can easily tone it down. Remove the white pith, rub it with salt and soak it in water. Voila, all you get is a mild background flavour that lends a pleasant edge to the noodles. I find my tastebuds changing as I get older – I’ve started developing a liking for foods that I used to hate and bittergourd is one of them. We all turn into our mothers/fathers eventually? Haha!

Speaking of health, this dish is also a tasty way to incorporate a healthy vegetable into your daily diet. Did you know that bittergourd helps reduce high blood pressure?

Final note: As bittergourd and dried shrimp are strongly flavoured ingredients, some people may want more or less of them. Also, the size of bittergourd can vary. Do use your personal preference as a guide.

For more Malaysian noodle recipes, Mee Goreng Makcik Kantin is a sure crowd-pleaser! 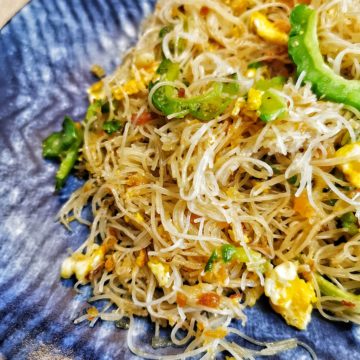