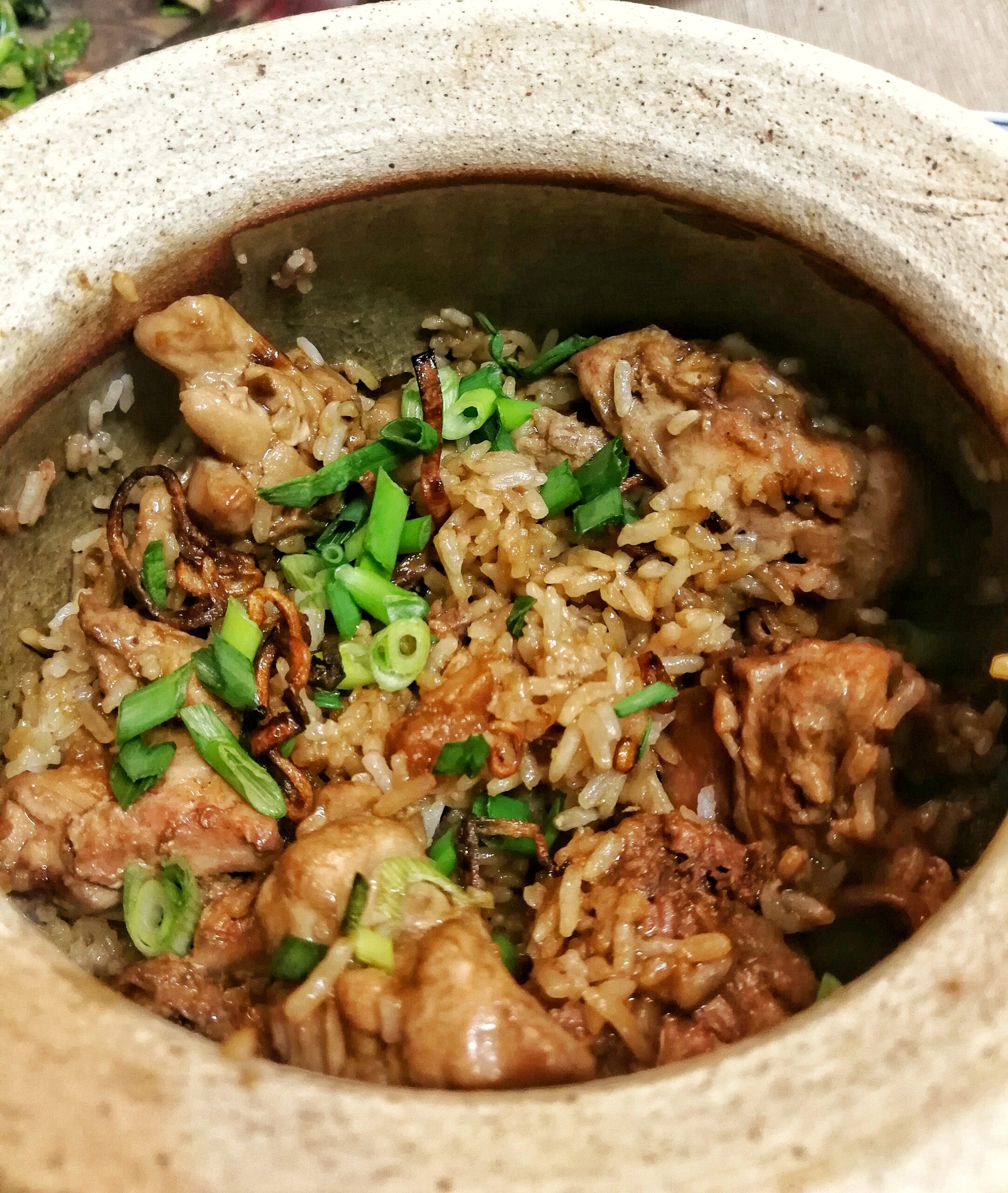 Growing up in Ipoh, I got to know claypot chicken rice at a very young age. I still remember where I ate it: a roadside stall in Hugh Low Street.

The uncle and aunty would monitor multiple claypots on stoves like hawks, holding fans to control the flame and lifting the lids occasionally to check if the rice had cooked, or to pour sauces. When our order eventually arrived at our table, the claypot looked so dangerous with wisps of angry steam escaping through the cracks between the lid and pot. But once you lifted the cover … Mama mia! The heavenly smells drove me wild.

Sadly, now that I’ve moved to KL, I don’t get to eat it often as my neighbourhood doesn’t have any good claypot rice stall that I know of. It never crossed my mind to make claypot rice though, until I saw a claypot craftsman at a booth during Hari Kraf Kebangsaan two years back. I love old-school artisanal goods. And it was really cheap, less than RM15, so I bought it without thinking twice.

Once I got home though, I started getting cold feet thinking it must be so difficult to use. The poor claypot sat in my cupboard gathering dust for nearly half a year until I was browsing recipes one day. A picture of claypot chicken rice popped up. I jumped up with a start and told myself, that’s it! I have to do this by hook or by crook!

To be honest, I was terrified, but my longing for claypot chicken rice was even greater …

That was a year ago. And you know what? I’ve made chicken rice many times, as well as other dishes with the claypot. I’ve tweaked the recipe multiple times, using tricks and tips I learned from watching other cooking videos.

But the best tip for killer claypot chicken rice is this one from my father.

He applies this technique to a non-claypot dish – yam fried rice. I noticed Dad always pre-fries the raw rice in sauces and oil before boiling it (the normal process of cooking rice). “Makes the rice more flavourful and fragrant,” he explained.

One day, I wondered if I could apply the same technique to claypot chicken rice. So before cooking the rice, I pre-fried the raw rice directly in the oil and sauces, before adding water to cook it as usual. Wow, that single step made a world of difference! 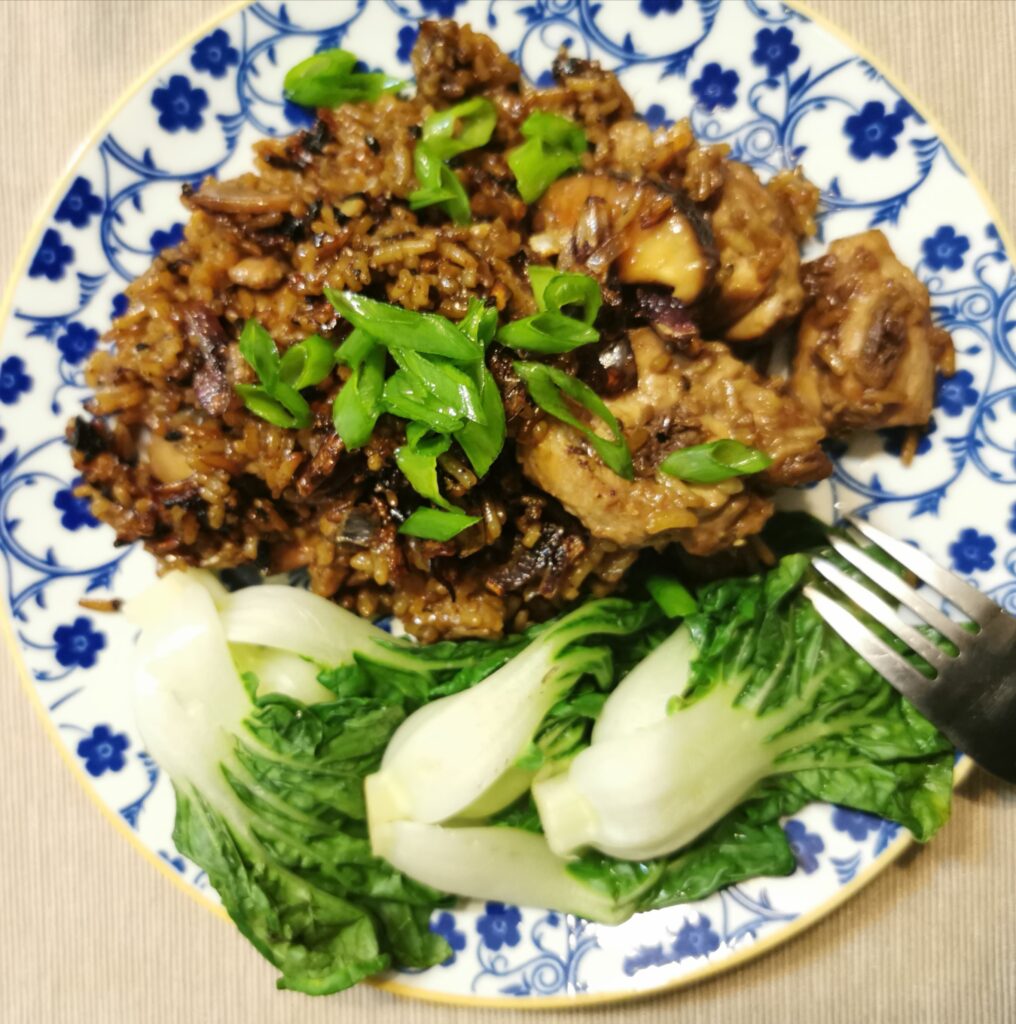 Later on, when I did more research, I found out that this technique is similar to making rice pilaf. Pre-cooking the rice this way imbues it with a richer and more complex flavour.

Why should you cook with a claypot?

2. A claypot is very easy to care for. Most of the commercial ones available are already glazed inside, so after cooking, just wash the inside with normal dishwasher and rinse the outside with water.

3. A claypot has superior heat retention properties, so it cooks food fast. That’s why it can cook the rice and chicken in 25 minutes or less. I fondly refer it as my low-budget answer to Le Creuset 🙂

If you’re thinking of getting a claypot, try Ramadas Pottery from Ijok, Selangor. I bought my claypot from him when he exhibited at Hari Kraf Kebangsaan. He was awarded Adiguru Kraf Tembikar (Pottery Master Craftsman) in 2012 due to his achievement and expertise in pottery field. I don’t have his business card anymore, unfortunately, but I did find an article with his contacts: RAMADAS POTTERY FACTORY, Batu 2, Jalan Kelang,45000 Kuala Selangor
Selangor, Malaysia. Tel: +6012 358 6304

Edit: I’ve revised the recipe slightly. In the original, I would add some minced ginger to marinate the chicken. However, I realise later that we’re already adding several pieces of ginger during the cooking process so this should take away the raw smell of the chicken. Anyways, you can opt for the method you like best! 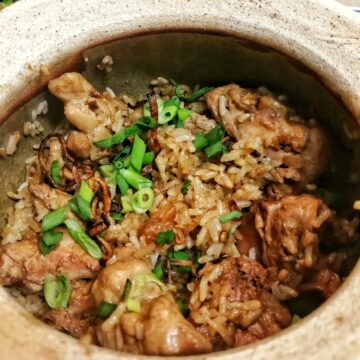