What could be so luxurious about chicken porridge?

If you make them the way my Aunt Wong Kim Yeng does, then it is SUPER luxurious. In fact, better than any dim sum restaurant out there!

I found out about her special porridge way back in 2006. I had just moved to Kuala Lumpur permanently to pursue a career as a full-time freelance writer. As I was still unfamiliar with the city, my Aunt’s family kindly offered a place for me to stay while I looked around for a room to rent.

Living there, I discovered what a great cook Aunt Kim Yeng is. One morning, she made chicken porridge for breakfast. It tasted phenomenal! After devouring three bowls, I simply had to find out what magic she put into it.

“Aunty, I normally associate porridge with sick people’s food, but yours is so good, so smooth and flavourful. What is your secret?”

“Well, I make my porridge a little differently,” she replied, a small smile playing at the corners of her lips.

“Well, your standard chicken porridge consists of water, rice and chicken, right? That’s why it can be quite bland. But my porridge—I put a lot of hoe liew (good stuff) inside.”

“The key is to build a rich stock from dried scallops, chicken meat and oysters, instead of using plain water to make the porridge more flavourful.”

“And the reason it is so smooth like tofu? That’s because when porridge has simmered to boiling point, I stir it continuously so that the mixture thickens and becomes less lumpy.”

“So that’s why you were already at the stove when I got out of bed at six o’clock this morning,” I said with dawning realisation.

She nods. “And finally, I stir in finely diced century egg for “hau kam” (mouth feel) and salted duck yolk for a rich, hearty flavour.”

“Wow. I had no idea so much work goes into a simple pot of porridge.”

“Well, as a parent, you want the best for your children. Most kids have no idea how much love and devotion goes into the preparation of a simple meal.”

I’ve made this porridge numerous times. While it’s true that there are extra steps compared to your normal porridge, the results are well worth the effort. A true labour of love! 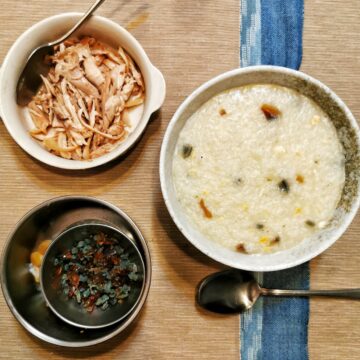