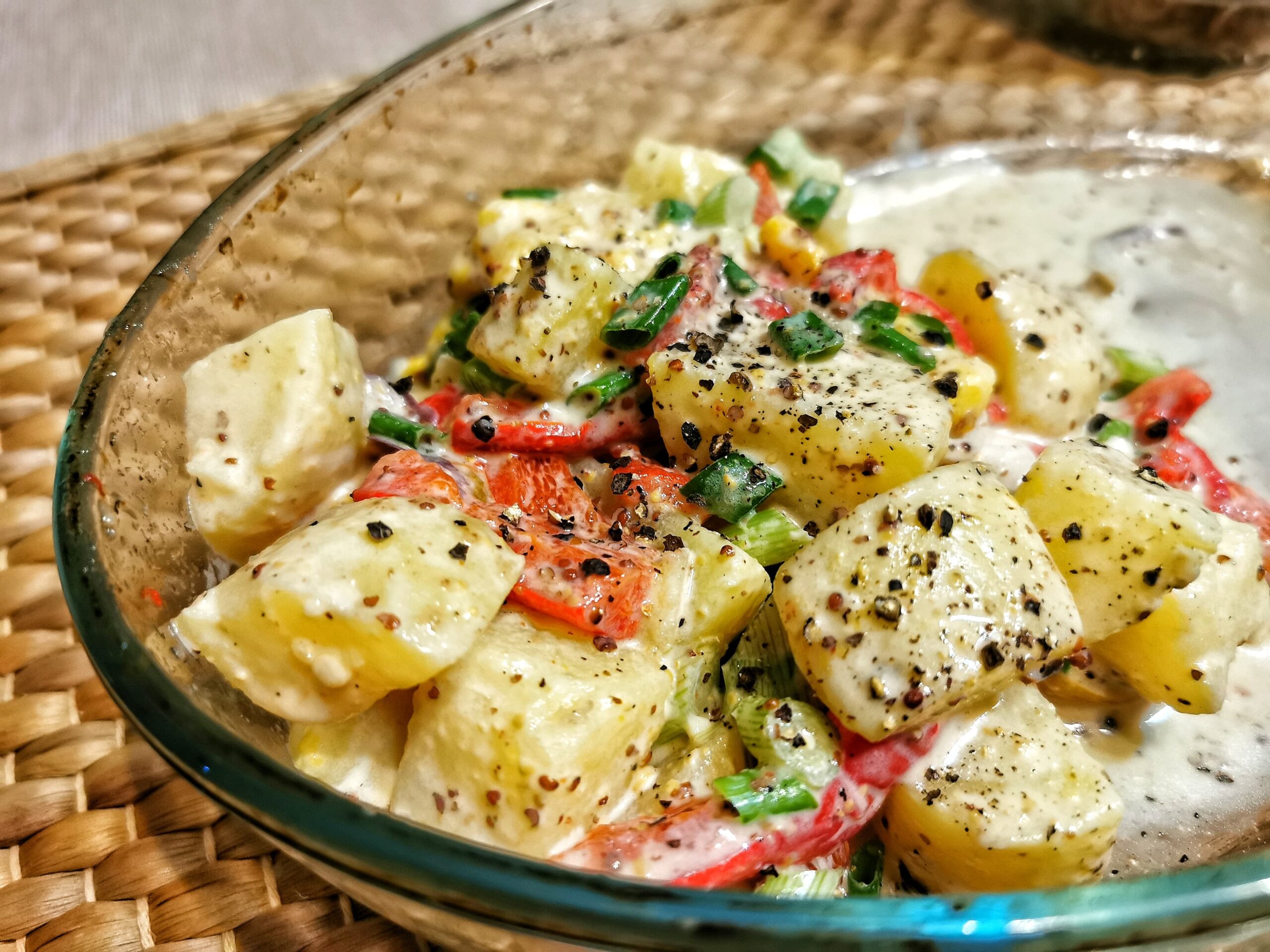 ANOTHER vegetable salad recipe?? Some of my old friends will think I’ve undergone a lobotomy or something. After all, I used to hate vegetables so much that when my mum wasn’t looking, I’d dump the greens on my plate into the drain!

But this potato salad recipe is so good that I just HAD to share it with you guys.

After a really heavy lunch on Sunday, I thought hubs and I should have a light dinner. Salad was a natural option, but since it’s dinner we’re talking about, it had to be filling enough. A hearty potato salad seemed like the perfect solution.

In the process of Googling, I discovered two promising-sounding potato salad recipes. A classical version by legendary chef Jacques Pepin that involved making a really easy dressing and one more by Australian TV chef Justine Schofield that incorporates roasted bell peppers. Both sounded equally delicious. A new dilemma arose: which one should I make?

After a bit of to-ing and fro-ing, I thought, why don’t I make BOTH – by combining them into one recipe?

So that’s what I did. The result is this wonderful salad that’s so so good it will please even carnivores!

It starts out as a regular potato salad. You know the drill: create a mayo-based dressing, add boiled potatoes and seasonings, blah blah.

Then the “surprising” ingredients start coming in, beginning with the roast peppers that lends extra depth and sweetness.

But it’s the final topping that will raise eyebrows even higher: fried shallots!

Why fried shallots? Because I wanted a smokey taste reminiscent of bacon bits while keeping the recipe vegetarian. Spotting the bottle of fried shallots on my kitchen counter, a light bulb went off in my head.

To be honest, I was initially worried that this aggressively-Asian condiment would clash with the classical Western flavours. Well there was only one way to find out.

Good news, it worked beautifully! The fried shallots lent a pop of smokiness that was harmoniously compatible the creamy dressing, hearty potatoes and vibrant bell peppers.

The other ingredient I added to the dressing was agave (I believe honey would work too). I found the original dressing in the Jacques Pepin recipe a little too sharp for my taste. Could have something to do with the type of mustard I used. To mellow the pungency down, I added some agave – yummmy!

I foresee this recipe will be making many repeat appearances on my menu. It’s great as a side dish but can also stand as a complete meal on its own. We ate only this for dinner last night and were perfectly happy and fulfilled. Burp! 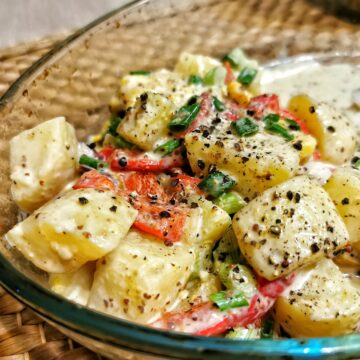 Here’s another delicious salad recipe that will win over even carnivores.