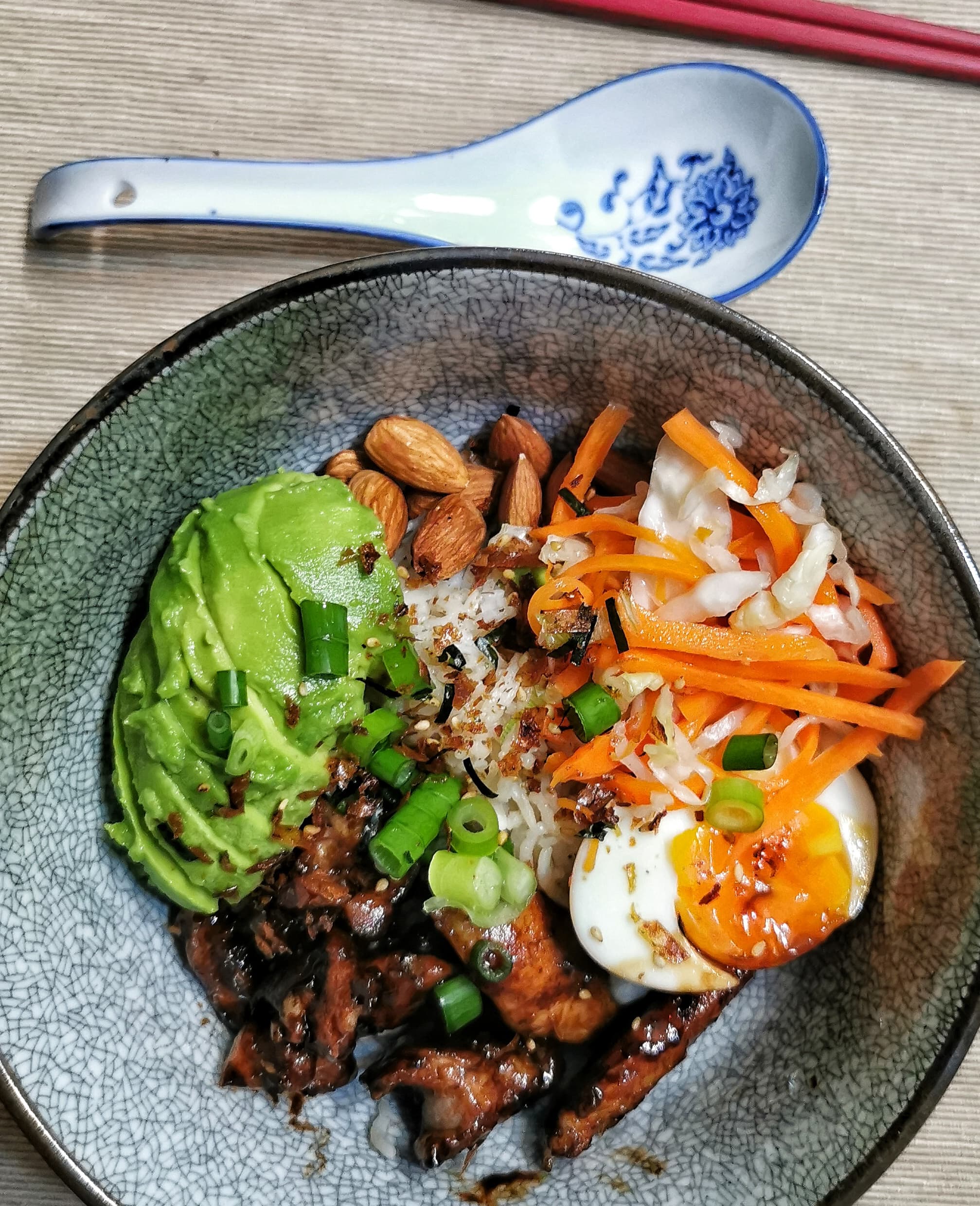 A teriyaki chicken poke bowl is a thing of joy – and the perfect quarantine meal.

First, what’s poke bowl … is it Japanese or Hawaiian?

Poke is a regional American-based cuisine from Hawaii, heavily influenced by Japanese cuisine.The word “poke” means “to slice or cut” in Hawaiian. In the original version, poke bowls feature chunks of raw, marinated fish scattered over rice. It is usually served with vegetables and umami-packed sauces.

But as the dish became popular, other nations have added their own spins to it. In poke bowl restaurants throughout KL, you’ll find all kinds of adaptations. There are poke bowls that feature teriyaki chicken, pulled beef and vegetarian versions that use tempeh or tofu as protein.

I never thought I would make this at home though, but in this post-Covid pandemic world, I’ve experimented with all kinds of recipes. When I finally attempted this teriyaki chicken poke bowl, I was bowled over by just how comforting, delicious and EASY it was to make.

Before you clobber me, consider the fact that teriyaki (照り焼き) is actually the name of a cooking method, not the name of a sauce. The method entails pan-frying or pan-grilling fish or meat in a sauce until it thickens and starts to glaze the protein. One of the most popular sauces used in the teriyaki method is that sweet, savoury, sticky glaze we’ve come to associate with this style of cooking.

Ok. Maybe I shouldn’t even call my version “teriyaki chicken”, but I guarantee you it is legit delicious. Why? 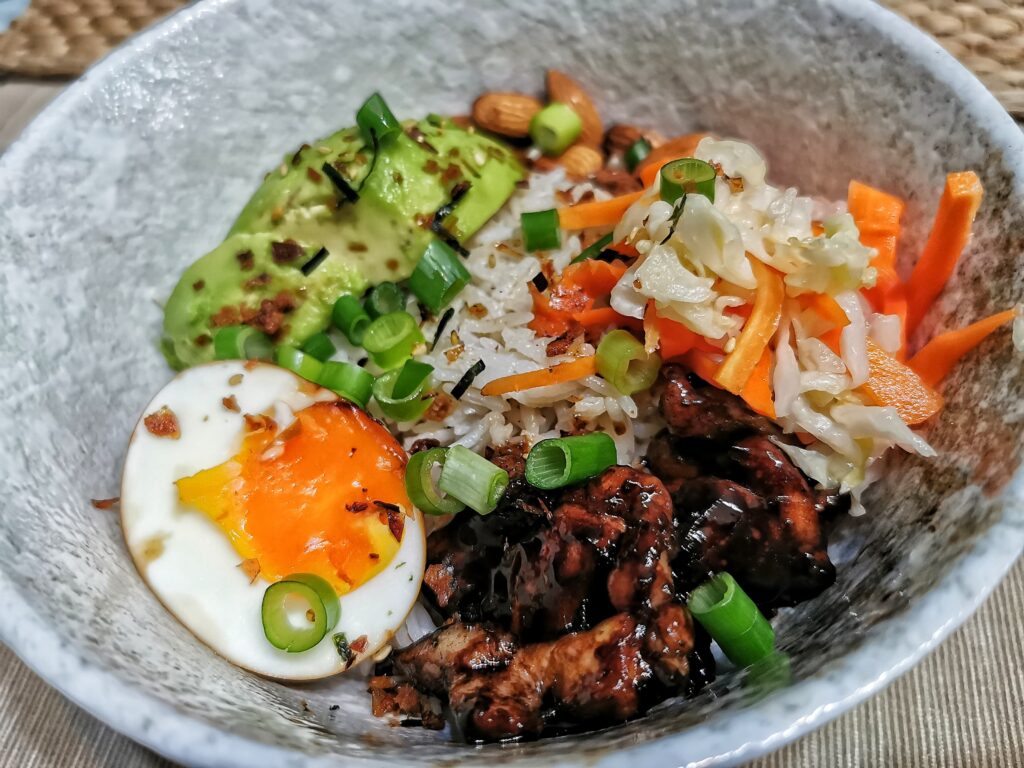 This is how I do it.

1. We’ll start with the teriyaki sauce. From what I’ve read, there’s no one standard teriyaki sauce recipe. I repurposed a  delicious Chinese soy sauce chicken recipe given by a dear friend. I adjusted the ratio slightly and added a dash of vinegar to brighten up the sauce. This sauce is thicker than the typical teriyaki sauce, but trust me, it is goooood!!! Possibly even better if you like thick, caramelly, sticky sauces!
2. The best thing about this recipe? There’s no need to marinate the chicken as the soy sauce and sugar-based sauce is so intense. Cut chicken into large chunks. Do not dice too small as the chicken will get overcooked and lose its juiciness. Then toss the chicken pieces in some cornflour, just enough to cover the outside. The cornstarch helps the chicken brown easily on the outside, stay juicy inside, and thicken the sauce as you’re stir-frying.
3. Now comes the cooking part. Heat up a little oil and when the pan is hot, add your chicken pieces and sear them until they start to brown on both sides. Then add in the teriyaki sauce and then let it bubble until the sauce thickens. While frying, spoon the teriyaki sauce over the chicken occasionally so that the chicken absorbs as much of the delicious glaze as possible.

Poke bowls are so versatile that you can literally put whatever you want in it, as long as the ingredients are complimentary in flavours and textures. I used:
1. Ramen egg – to me, nothing says Japanese like ramen egg, so I made one, and then rolled it around in the teriyaki sauce so that it’s coated with all that precious goodness!
2. Avocado – the creamy texture of avocado binds everything together
3. Pickles – you can use store-bought. Me, I make my own pickles by marinating julienned vegetables in a mix of vinegar, salt and sugar.
4. Rice – ideally, you should be using Japanese rice but I don’t have any, so I cheated by making a vinegary rice. When my normal rice had just finished cooking, I poured a Kewpie soy sauce dressing over the rice. This ain’t sushi rice but it went well with all the other toppings. 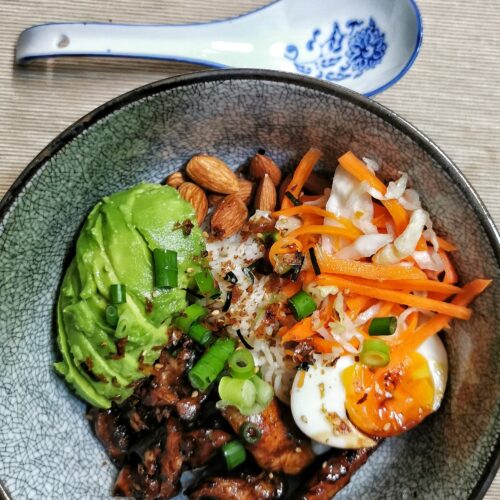 Sauce for chicken and egg

Folks, if you're not aware yet, I have a preloved,

A sweet-sticky condiment of slow-cooked onions, on

Meet my rice casserole inspired by the Spanish pae

This video took me forever to make, but it was wor

Love chocolate cake, but feel it's difficult and t