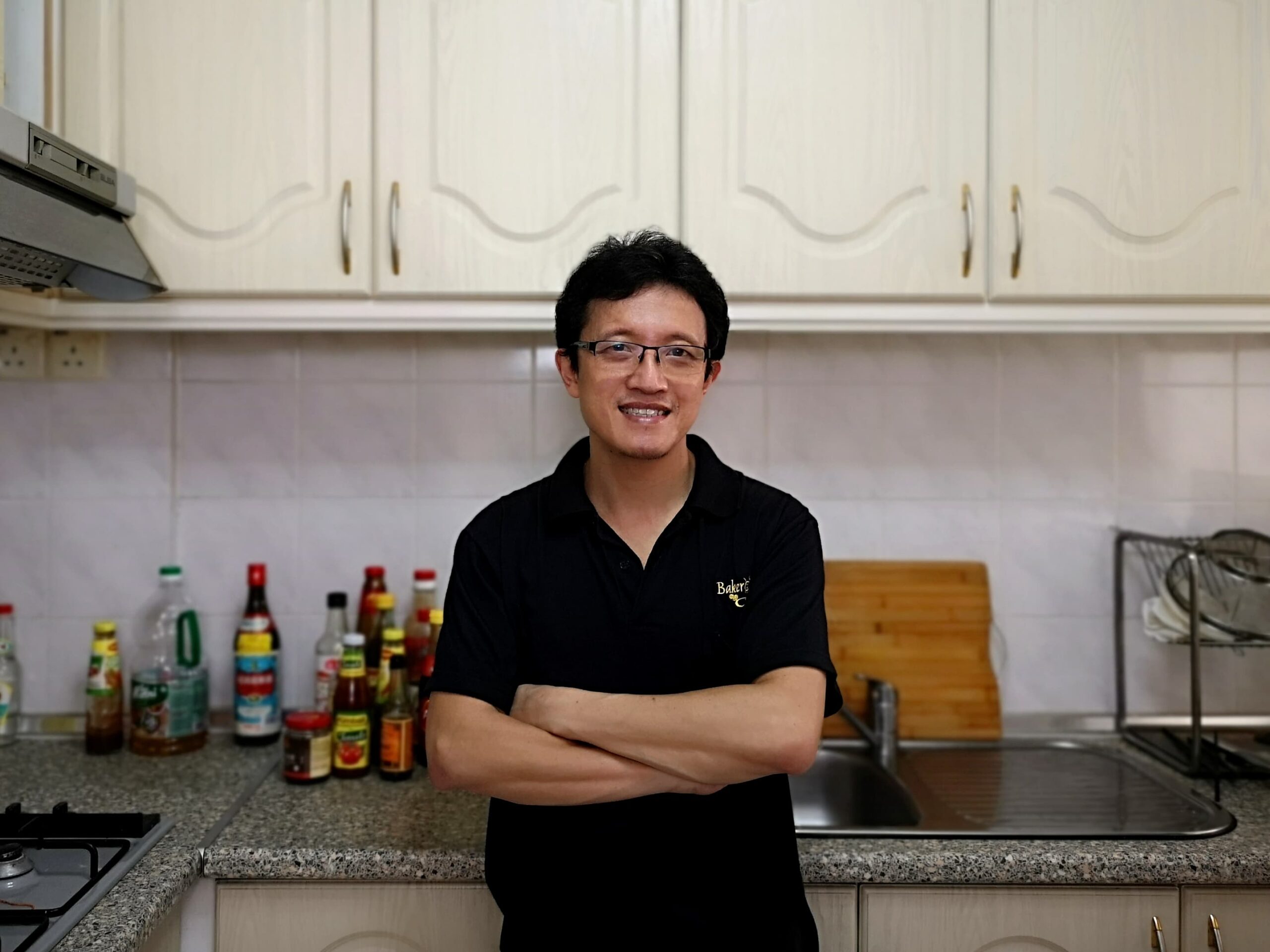 Becoming rich and famous was not on KP Kwan’s mind when he set up his Youtube channel Taste of Asian food in 2016. He merely wanted to create an archive for recipes that he developed for Bakeroni, a neighbourhood café he runs in Taman Desa, Kuala Lumpur, with his wife Moi Ching.

But fate had other plans. In four years, Taste of Asian Food has become one of Asia’s biggest social media channels, with over half a million views per month on the food blog, and over 160K subscribers on YouTube. Several of his recipes such as butter cake and kapitan chicken have been regularly ranked on top of Google.

What’s remarkable, Kwan achieved these results purely through 100% organic reach – meaning he did not spend a single dollar on advertisements promoting his Youtube channel. In other words, he is the real deal.

What’s so attractive about the Taste of Asian Food channel?

Speaking for myself, I was drawn by the quality of the content. Kwan’s instructions are meticulous, detailed and rich in technical information that really helps improve the outcome of a dish.

In every video, he explains why certain ingredients or specific methods are employed. For example, in this kung po tofu recipe, he tells us why we must pan-fry the tofu before braising it:

“There are two reasons: 1) A thin layer of skin is formed on the surface during frying, which can hold the tofu’s shape and prevent it from breakage during cooking. 2) It also creates texture and additional flavor.”

Let’s find out more from the man himself.

Why did you decide to start a cooking channel on Youtube?
My Youtube channel was a natural extension of my own journey as a F& B operator. About 18 years ago, my wife Moi Ching, who was in the corporate sector, was exploring career options because we wanted to spend more time with our young son. That’s how the idea of a café came up and we started Bakeroni in Taman Desa.

In the early days, we only sold beverages and snacks but as time went by, customers wanted to eat proper meals. Since Moi Ching was helming the front office, I helped out in the kitchen whenever I was not at my pharmaceutical practice.

I had to develop recipes for Bakeroni. Although I knew how to cook since young, I felt I should educate myself and supplement my basic knowledge of cooking. I bought lots of cooking textbooks that are actually used in culinary schools. Youtube was a great resource as well.

I wrote down all these recipes that I developed through trial and error. I wanted to keep an archive of everything I cooked at Bakeroni so that my kitchen staff could replicate the exact dish. That’s when I started documenting my recipes in a blog.

However, as time went on, I felt the food blog itself was not sufficient – not dynamic enough to deliver my message impactfully. That’s what prompted me to go into video creation.

When I started six years ago, I invested in a camcorder specifically to do Youtube. After that, though, things started to evolve. DSLR can do the same job or even better, so I switched to my camera. In the last two years, phone technology has advanced so much that I now use my handphone to create videos.

I’m currently shooting in 4K using a Huawei P30. When you shoot in 4K, the video is very clear because you capture a lot of detailed information. In the event you want to crop a scene, you can zoom in and enlarge a specific section during postproduction. By shooting in 4K, you can do that without losing clarity.

Editing is the most difficult part of videography. I started with the programme Power Director, which I still use. It came with fundamental tutorials but there are also people on Youtube talking about how to use Power Director. So many things can now be self-learned because of the internet.

160K is an impressive achievement. What did you do to build Taste of Asian Food’s subscription to this number?
Initially when I started, I just uploaded whatever I had. When people start commenting and you see the number of viewers grow, you get excited and want to do the next one. Once the number builds up, it is like a snowball.

I never paid for any ads to promote my Youtube channel – I grew it 100% organically. Organic growth is best if you have good content that will capture the segment you are targetting.

Then when I hit a certain number, I started thinking how to accelerate my growth. I began reading about other Youtubers’ experiences and tried to apply their tips to my Taste of Asian Food videos.

“What are three fundamental tips that Youtubers should know?”

1. Choose your video title carefully.
If you have a cup of cappucino, titling it “Nice cappucino” isn’t going to attract a lot of eyeballs. But if you say “How to make a perfect cappucino”, the effect will be different. Your title should contain words that attract people’s attention and state your intention.

2. Your thumbnail image is important.
When you open up Youtube, what is the first thing you see? You browse through the images. An eyecatching thumbnail of the youtube video is crucial.

These are what the gurus say. But if you look at the bigger picture, they don’t guarantee exponential growth.

What, then, do you think will determine a Youtuber’s success?
Uniqueness, and a little bit of luck.

Have you heard of the toy reviewer Ryan? It’s just a 10-year-old boy unpacking new toys. But if you think about it, he really hit the bullseye because the children like it while the parents want to know. Then there’s Liziqi, China’s no 1 Youtuber. Her video is just about cooking and planting vegetables but she has 12 million subscribers!

Ultimately it boils down to your content. It’s what the Youtuber wants people to see, and whether people like what it. This is also the most difficult (and elusive) part. You can’t learn it.

For the benefit of us noobs, can you share how the whole Youtube monetization process works?
First, use your Google account to open a Youtube channel. After that, you can start to upload videos. When your subscribers hit a certain limit – meaning your channel has reached the entry level for monetization – you will get a notification to activate the monetization process. Now, advertisers can put ads in between, before and after your videos. You can opt for a cheque to be sent to you or request for a direct bank transfer. Every month they will remit the payment to you.

I got my first payment three years ago. I thought to myself, “So this is real!” The first one is always the most exciting. It’s more exciting than when I get my payment now, even though I definitely get more now because my subscribers have grown in number.

How much time do you spend creating videos and what is the frequency of your posting on Taste of Asian Food?
I upload once a week. I spend a few days to produce a video because I have to shoot it, edit it and write a blogpost, as I want both the video and blogpost done at the same time before publishing them.

Have you met other Youtubers?
Not yet. In this community people are working independently without interacting with other people physically. It will be great if somebody can organize something and everybody comes together.

At Bakeroni Cafe, we can sample dishes that you also teach viewers to cook. Some of them, such as General Tso’s chicken, Rendang Minang, are not common to other Malaysian cafes. What’s your rationale for featuring dishes that may be unfamiliar to Malaysian palates?
Our concept has always been to create something from scratch and not sell something too identical to other eateries. Customers have no reason to come back to us if we’re selling the same thing as someone else. If I sell a very good char kuay teow, in the minds of people, how good can a char kuay teow at a café be compared to an uncle by the drain? They will go to the uncle by the drain.

So I thought, if I ever want to offer a dish, our version should be different from someone else’s. Or we should create something nobody is selling at least a few km from our shop. For example, Rendang Minang is available at Indonesian stalls but not a Western café. As far as I know, within a five-minute drive, nobody has this dish, so we monopolize it. This concept works, at least for us.

So far, most if not all of the dishes featured in your channel are Asian, living up to the title. Have you ever considered expanding your repertoire to Western food?
No. For example, If I cook Italian or French food, no matter how good I am, I will never be able to compete with a local Italian/French person. It’s like if a foreigner comes to Malaysia and cooks typical Malaysian food, no mattter how good he is, people will first have a question mark. I felt it would be very challenging to overcome this barrier in order for viewers to understand, follow and accept me, so I decided not to go in that direction.

You’ve just achieved your 4th anniversary .. congratulations! What motivates you to keep going?
There are multiple reasons, but the most important motivation is when we upload the video, somebody comments that it is useful and says, “I can cook now!” Even if you make a great video but everyone scolds you and says you are doing it wrong, you will stop. When somebody recognizes what you have done, and you find it beneficial for somebody else, that is the most important motivation factor – that is the power of positive feedback.

For more stories about inspiring Malaysians, check out this Japan-based, Sabah-born food artist!

Comments (5) on “Taste of Asian Food”